Firefighter Dies in Crash On His Way to Fight a Wildfire 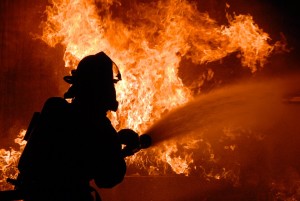 A tragic crash involving a firefighter has just been reported in California.

According to a series of news reports, a firefighter who was one of the many fighting a central California wildfire died this past Wednesday when the water truck he was occupying overturned.

The accident happened when the firefighter in question was on his way to continue his and his colleagues’ effort to contain the 19-square-mile fire on Vandenberg Air Force Base.

The vehicle was traveling on Highway 246 when it crashed at a roundabout outside the city of Lompoc. A firefighter from Ventura County died in the crash while a second firefighter was injured. The truck had no other occupants.

The California Highway Patrol is investigating the crash. So far, details on how the accident took place haven’t been released.

Until more details are unveiled, we should not speculate as to what led to the crash. Nevertheless, we hope that the families of the victim are receiving the support they require in this time of need. We also hope that the injured individual involved in this crash is recovering quickly.

These types of crashes should not occur. Drivers should always be alert to potential risks by following road rules, avoiding speed, and making sure that distraction is not taking their attention away from the road.

We hope that the CHP is able to identify the factor that led to this crash so others can be avoided.

You may follow this link to read the full article.

If you’re a driver, stay safe by always focusing on the road ahead. In California, drivers are often distracted by their phones and other gadgets, or by passengers or pets. If you’re serious about your safety and the safety of your loved ones, drive defensively and attentively. Avoid putting others in danger by checking twice before changing lanes, and remember to always share the road with individuals who are vulnerable such as cyclists and motorcyclists.